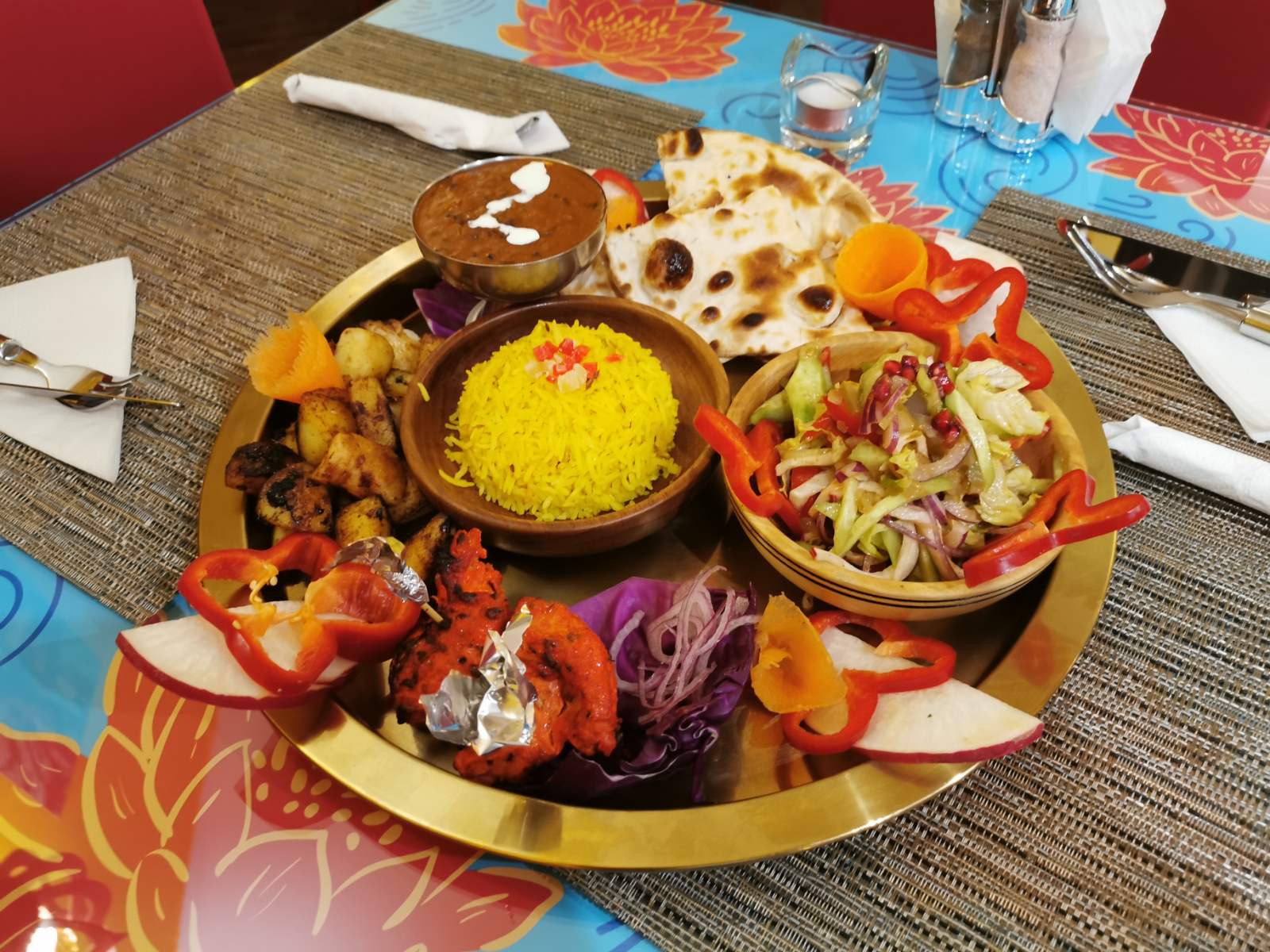 Nepal borders India and Tibet (China), that is why there are culinary interferences from both sides

Nepal borders India and Tibet (China), that is why there are culinary interferences from both sides. The Nepalese love spicy curries, flat breads and rice, same as the Indians do, but they don’t use cream, rarely use sugar and in general the Nepalese food is considered more healthy.
The Nepalese use spices, which are more or less the same as in the Indian cuisine: turmeric, hot peppers, garlic and ginger, cilantro, and the famous typically Nepalese spice momo masala contains herbs and spices, which are used both in Indian and Chinese cuisine: cardamomq cumin, clover, cinnamon, onion, garlic, dry ginger, turmeric, red chillies, coriander, mustard, fenugreek.
As in most of the asian countries, “pulao” is a loved main dish in Nepal also, often sided by yoghurt and “papad” – thin and crispy chips-like roasted bread, made of rice, lentils and chickpea flour.
Nepalese and Indians love curries prepared from lentils and different types of legumes, potato, tomato, spinach and other leaf vegetables. They also like “chutneys” – different  spicy sauces or pesto, added to their food. Both traditional cuisines use “”ghee” – refined butter too.
One key way that the 2 cuisines differ is in soups as the Nepalese love “Thukpa”, a variation on chicken noodle soup (which can also be made with other meats or vegetarian).
Of course, being in such close proximity to India, you will naturally see traditional Indian food in Nepal too.
Contrary to popular belief, Hinduism does not require practitioners to be vegetarian. But since Hinduism makes a big effort to not hurt any other life forms, vegetarianism has become common. In fact, 80% of Nepalis are Hindus, which is almost exactly the same in India. Where the 2 countries differ, religiously, is that Nepal has only about 2.5% of the population is Muslim, compared to 14% in India. Nepal has over 8.5% of the population practicing Buddhism, compared to very few in India.
Unlike many parts of India, eating chicken and bison, goat, even pork in some parts is common in Nepal. This is probably due to the high mountainous terrain, requiring a lot of physical strength and the more difficult growing and lesser crops and vegetables in the highlands. The fish is from rivers, as there is no sea in Nepal.
One of the most famous foods in Nepal is “momo” – kind of dumplings, stuffed with chopped chicken meat, buffalo meat, sometimes pork or vegetables. Steamed or fried, they are inseparable part of the menu in every Nepalese restaurant, mostly as a starter. 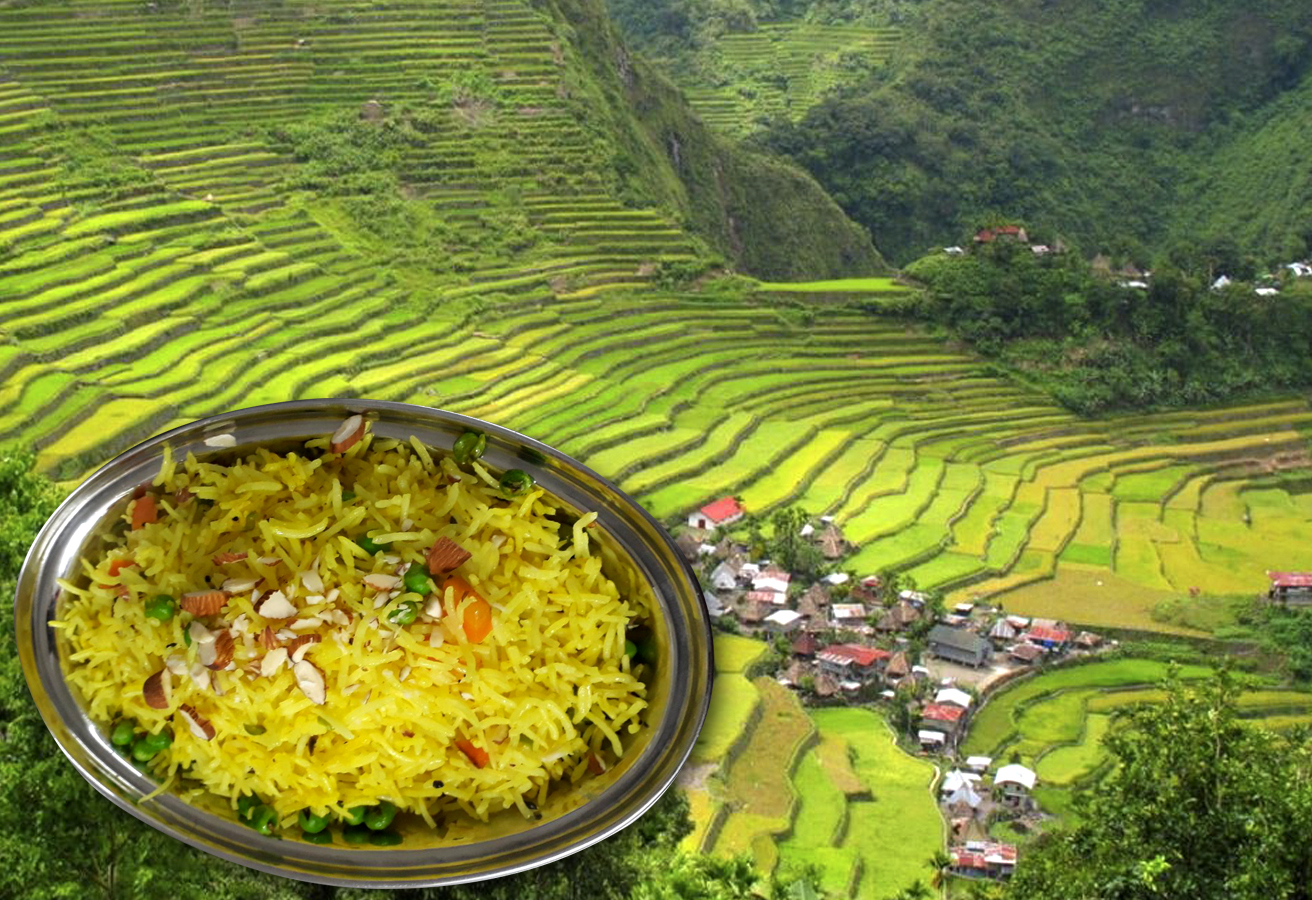 Rice is one of the most important crop in whole Asia

Rice is one of the most important, or even possibly the most important crop in whole Asia, and it is cultivated intensively also in the Himalayas, where terraces occupy every possible piece of land. The terraces preserve the steep slopes from erosion and in the same time allow to use the water resources more efficiently. This type of farming consumes a lot of effort, but gives good crop and it is not a mere coincidence that the massif is called “Annapurna” – full of grain - as it povides the precious water to the fertile terraces with rice. As the Nepalese say, not a single grain should fall on the ground, as it is so precious….